In an unusually bitter condemnation, Russia lashed out at Israel Friday following a pre-dawn strike blamed on Israel at Damascus Airport.

An Israeli satellite intelligence firm published images showing significant damage to the runways, which it said disabled the entire airport.

Russia’s Foreign Ministry on Friday evening condemned the “vicious practice” of  Israeli strikes on civilian infrastructure, which it said were “provocative” and “in violation of the basic norms of international law.”

Israel frequently targets Iran-tied facilities and convoys in Syria, and relies on a “deconfliction mechanism” agreed with Moscow to avoid direct confrontation with Russian forces there. Israel’s ties with Russia are being strained by the Ukraine conflict, however, and Friday’s bitter comments from Russia about the Syrian strike underlined the rising friction.

Syria’s state media reported that Israeli jets struck targets south of Damascus at around 4:20 a.m on Friday, wounding one person and causing material damage. Hours later, the country’s Transport Ministry announced that it would suspend incoming and outgoing flights at the airport, citing technical disruptions.

ImageSat International (ISI) said the strikes “completely disabled” operations at both the airport’s runways. Each runway appeared to have been struck three times.

In separate missile strikes in April and May, other sections of one of the runways were damaged in attacks attributed to Israel. According to ISI, those strikes shortened the length of the runway significantly and prevented large planes from landing. 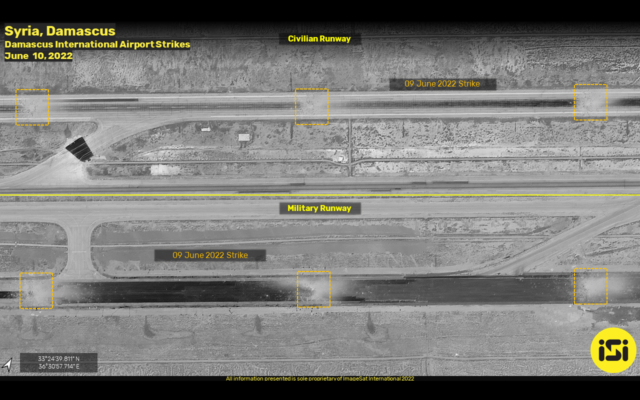 Avichay Adraee accused Iran and Hezbollah of “endangering civilians” by smuggling the armaments via civilian flights to Damascus International Airport in order “to maintain secrecy.”

Israel has staged hundreds of strikes on targets in Syria over the years but rarely acknowledges or discusses such operations. It says it targets bases of Iran-allied militias, such as Lebanon’s Hezbollah group that has fighters deployed in Syria backing Assad’s government forces, as well as arms shipments believed to be bound for various proxies.

Israeli strikes have continued in Syrian airspace, which is largely controlled by Russia, even as ties with Moscow have deteriorated in…

US to send $3.75B in military aid to Ukraine, its neighbors