Guide to women’s health insurance in 2022

For women in the U.S., access to affordable coverage in the individual health insurance market has improved markedly over the past decade – due in large part to coverage improvements and consumer protections delivered by the Affordable Care Act.

Prior to the ACA’s implementation – largely starting in 2014 – women faced many barriers to coverage:

We hope you’ll use this guide to get a clearer understanding of how coverage has improved – and what you should expect for coverage of women’s healthcare when you’re selecting a health plan. 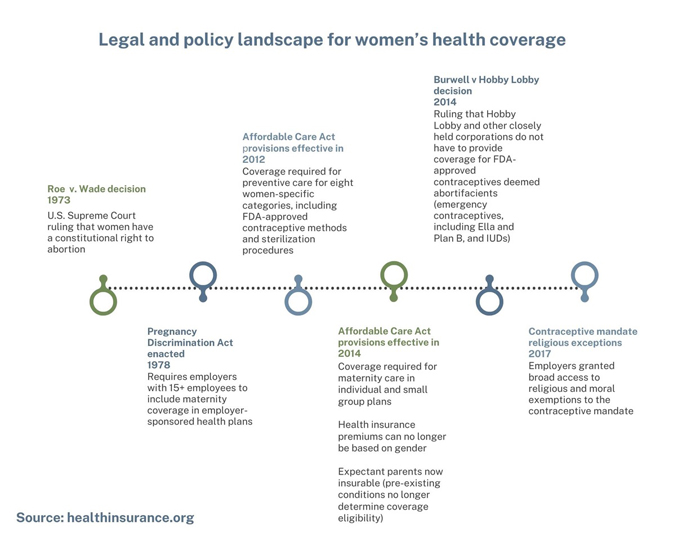 Preventive care for women under the ACA

Prior to implementation of the Affordable Care Act, coverage of women’s preventive care varied considerable from state to state. But beginning in August 2012, all health plans (other than grandfathered health plans) were required to provide coverage for certain women-specific categories of preventive care:

Prior to 2014, just 12% of individual-market health plans included maternity benefits. But the Affordable Care Act has been a game-changer. Maternity care is one of the essential health benefits that must be included on all individual and small-group policies.

That means that an expectant parent can now obtain coverage in every state during open enrollment or during a special enrollment period triggered by a qualifying event. And women are no longer charged higher premiums than men, despite the fact that every new major medical health policy includes maternity coverage.

Treatment for infertility is not one of the Affordable Care Act’s essential benefits – and coverage for infertility treatment is not mandated by the ACA or any other federal law. But some states have regulations that go beyond the minimum requirements laid out by the federal government with their own laws, regulations, and mandates.

These state rules only apply to state-regulated plans, which include health plans that individuals and businesses purchase from an insurance company. But self-insured employer-sponsored health plans are not subject to state insurance…

Summer holidays: is it cheaper go to the UK, France or Spain? | Consumer affairs

Without insurance switch, Council should find new way to save – New York Daily

Is ‘defund the IRS’ the new ObamaCare repeal?