Gantz landed in the Turkish capital Wednesday evening for the first official trip to Turkey by an Israeli defense chief in over a decade, a sign of re-blossoming ties between the countries.

According to a schedule published by his office, Gantz is slated to meet with Erdogan at the Presidential Complex at 3:30 p.m.

“As part of the meetings, Defense Minister Gantz will renew the official defense relations between the countries,” his office said in a statement.

The meetings mark another step in a year-long process that has seen the countries inch back toward full diplomatic relations after over a decade of frayed ties. 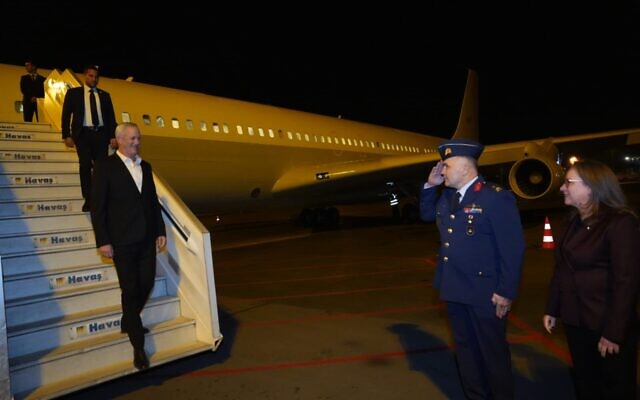 Defense Minister Benny Gantz touches down in Ankara, Turkey, ahead of a meeting with his counterpart Hulusi Akar, October 26, 2022. (Elad Malka/Defense Ministry)

The trip comes two months after Dror Shalom, who heads the Defense Ministry’s Political-Military Bureau, met Turkish defense officials to “renew the lines of security relations between the countries” after a decade, the ministry said.

During Shalom’s meetings in Turkey, the issues that would be discussed between Gantz and Akar were agreed upon, the ministry added.

On Wednesday, ahead of Gantz’s flight, a defense official told the Walla news site that the trip would likely not see any weapons deals being signed between the sides.

“A race of procurement should not be expected here… we are very, very careful to continue this [process] with measured and careful steps. We made it clear and it will be made clear as part of the minister’s visit,” the official said, noting the sensitive ties Israel has with Turkish rivals Cyprus and Greece. 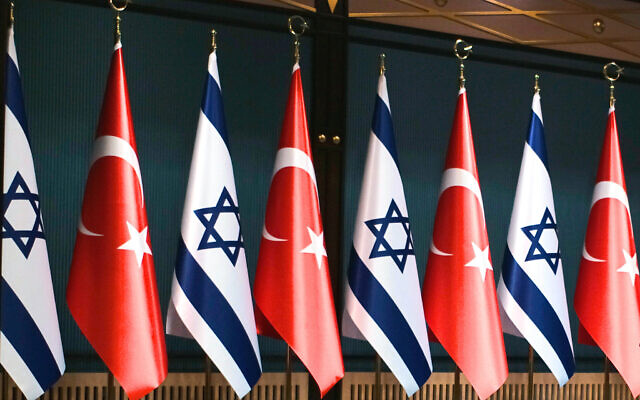 Defense ties were once a mainstay of Israel’s relations with Turkey, but unraveled as diplomatic ties soured.

Renewed defense ties between Jerusalem and Ankara were said to have been made possible after Turkish authorities managed to foil a series of attacks by Iranian cells that were planning to assassinate or kidnap Israeli tourists in Istanbul in late July.

Last month, for the first time in a decade, a Turkish warship anchored at an Israeli port.

Also last month, Prime Minister Yair Lapid met with Erdogan on the sidelines of the United Nations General Assembly’s annual high-level meeting. It was the first such meeting between an Israeli premier and the Turkish leader since Ehud Olmert met Erdogan in Turkey in 2008.

Trump announces Florida rally with Rubio — but not DeSantis

Microsoft, not ThinkOn, received $1.2-million contract for work on ArriveCan

Why Turkey is stalling on Finland and Sweden’s NATO bids – Vox.com

Turkey’s Turning Point: What Will Erdogan Do To Stay in Power? – Foreign…